Delegation is something that every Project Manager should know. We need to delegate tasks to get rid of the Monkeys. Here, Monkeys are nothing but the ‘next move’ as described in the book- ‘The One Minute Manager meets the Monkeys’ by Ken Blanchard, William Oncken, Hal Burrows .

Poker is a family card game that everyone played at least once. We live in a reality where ‘I don’t have time’, an excuse is heard constantly and we refuse to find time for playing in our adulthood – so why not to do it at work?

The truth is, no matter how good you are, you won’t complete a project by yourself. You don’t have all the skills that are needed, and probably even time for that during the working day. You need to know how to delegate tasks – which is really not an easy job!

We, as the Project Managers, need to encourage teams to self-organise themselves. We’re here to be a part of a team, help, and lead, but not to manage (at least not anymore). We need to make sure that the team members trust each other, can run projects in a collaborative way (thanks to the combination of skills that team has), and that everyone is clear about their responsibilities and roles. By distributing control and delegating, we empower people, but as much as we want to give the team a freedom, we must set some boundaries.

As you can imagine, it is difficult to not only decide which tasks should go to whom, but also which level of decision-making process others should have on a given task. Delegation Poker cards will definitely save the day.

How to start? Get your cards! You can either order a set from the Management 3.0. shop or just download a deck of cards (which are available in 14 languages!) 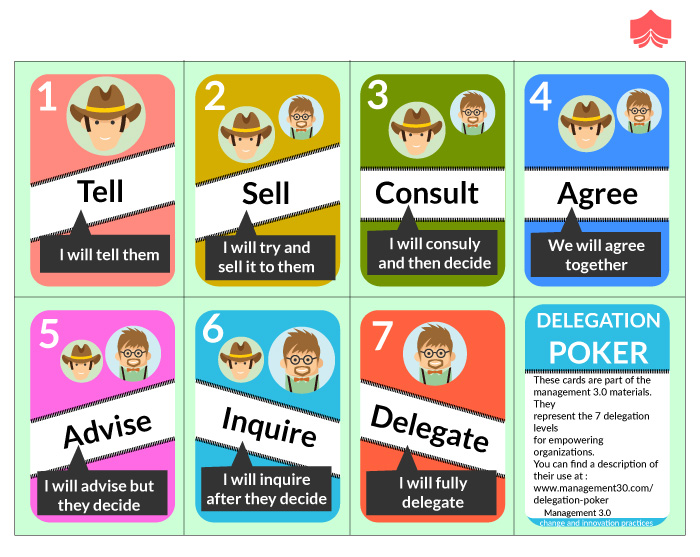 You’ll find 7 levels of responsibility on the Delegation Poker cards. It goes from I’ll do that so I’ll be an observer, they’ll do that. Let’s take a closer look at the cards:

1) Tell, I will tell them – The highest level of the responsibility, a person will make decisions and inform others about them, he or she doesn’t need to consult topic with others or try to convince them

2) Sell, I will try and sell it to them – A person knows what he or she is doing, but wants the rest of the team to like it too. The decision stays with the person, but the vision is shared.

3) Consult, I will consult and then decide – On the 3rd level you don’t make a decision by yourself, there are tasks that people have more experience with, and where collaboration is required to find the best solution. Decisions are still made by a person with this level but it happens after consultation with other team members

4) Agree, we will agree together – You’d think that it’s an ideal level where everyone needs to agree with each other and the decision belongs to the whole team. There are situations where that’d work, however, we need to be careful to not to find ourselves with not being able to make any decisions or debating on things that should be fixed (e.g. you probably don’t want to give a product’s quality under discussion)

5) Advise, I will advise but they’ll decide – A person gives away the final decision but shares experiences and can give an advice

6) Inquire, I will inquire after they decide – Someone else will make a decision and a person with this delegation level will just check later what the decision is, or will be informed about the decision.

7) Delegate, I will fully delegate – It’s a very useful level if you don’t have the skills needed for a task, and somebody else has them. Delegate and trust – if you’re a Project Manager, you’ll probably leave configuring the database to the IT Specialists, right?

Now, you need is a set of predefined situations or cases that you want to delegate. Remember, you’re part of a team, so it’s important to include some of your tasks so that the team would be able to decide about their level of delegation (maybe they would like to be informed or consulted on given topics, or maybe you want and need to delegate some of your responsibilities).

You have cards, prepared cases and you have your team. Let’s start! 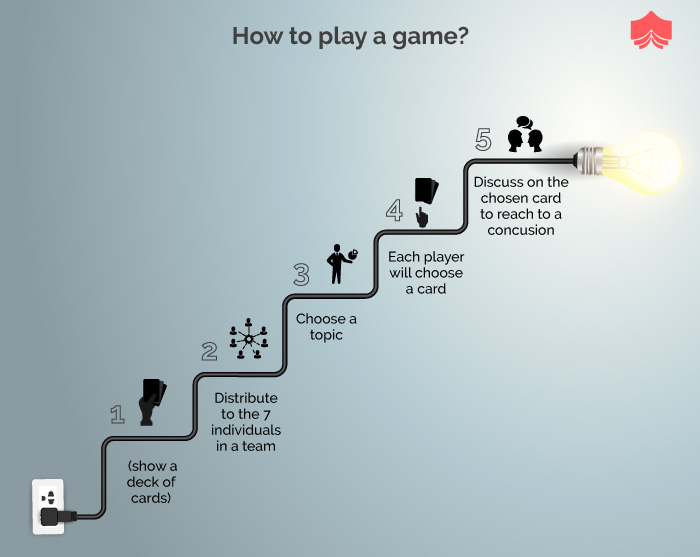 Choose a topic – one of the team members reads out loud one of the pre-defined scenarios, he or she describes a given story from their own experience.

Each player chooses a card that in his or her opinion describes the needed delegation level, when everyone decided, reveal the selected cards. There will be differences (and here the fun begins!) let people with the biggest different discuss.

There’s a lot of value in these discussions, there might be clarifications made, maybe a new scenario will get created, but you’ll see how the team sees their roles. 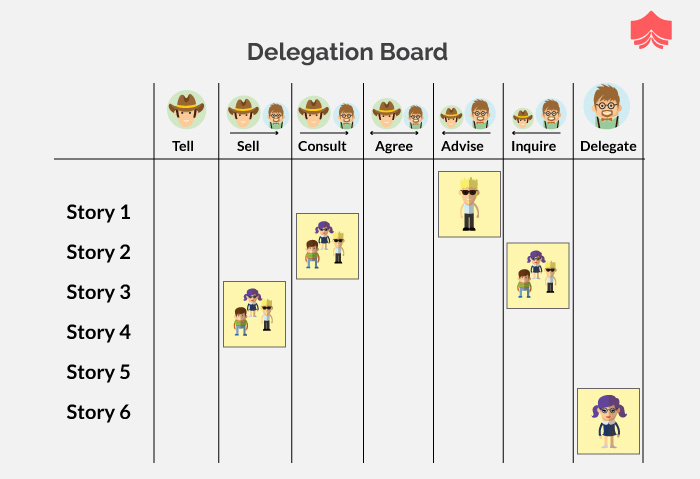 Make sure to write down the results and make it visible for everybody. You might want to have a board with all the stories and levels agreed to given roles. It might happen that when you complete the game, and you’ll see a whole, bigger picture, you’d want to re-do some of the cases. And it’s ok to do that! As long as you achieved consensus and everyone is clear about their responsibilities, play as many times as you need to!

As you can imagine, the main outcome of the game is to know who is responsible for what and at which level. You’ll definitely have fruitful discussions and will learn something new about each other, about your views and how you see yourself as a team.

Whether you’re a beginner in the self-organising teams world or a professional with years of experience, you’ll always learn something new. There is not a workshop that you can run that won’t be unique. Everyone has a different background and experiences, and that makes everything interesting. And remember – no matter how resistant your team might be, if you tell them that the next meeting will be actually a game, they won’t say no to fun!